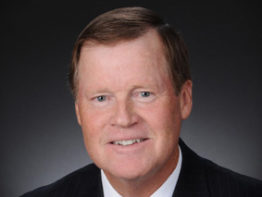 Hanson, a Waterloo native, graduated with a BA in English from ISU in 1981 and then received his MA from UNI in 1986.  He began his career in education and coaching in 1981 and taking on his first role of Principal in 1997 then later to be named Principal at Ottumwa High School in 2010.

“I believe that you should continue to learn, grow, and serve – even after retirement,” stated Hanson who retired as Ottumwa High School Principal in July. “I’m excited to be part of this program and believe it’s a worth-while endeavor for the participants and me.”

With 22 participants in this year’s class, Hanson will have an opportunity to mentor leaders from various careers.

This year three scholarships were awarded. The Andy Hansen Legacy Scholarship, a scholarship the Legacy Foundation named in honor of its former board member, is for one year’s tuition for a participant from a non-profit organization or small business that might not otherwise be able to send someone.

“It truly is an honor to be part of the development of leaders in Ottumwa through this scholarship,” stated Hansen.  “Each year I’m impressed with the quality of applicants that I review, making it a difficult decision on who gets the scholarship.” This year the Andy Hansen Legacy Scholarship was awarded to Garrett Ross from the Ottumwa Family YMCA.

The Alumni Association of Ottumwa Leadership Academy was able to provide 2 scholarships. “Each year we’ve seen the need for applicants who due to financial restraints are not able to participate without a scholarship.  We wanted to remedy that and our alumni graciously gave towards the scholarship,” stated Barb Allison, chairperson of the Alumni Association of O.L.A.  This year Cathy Pringle-Maletta from First Resources and Mendy McAdams from Tenco were awarded the Alumni Scholarship.