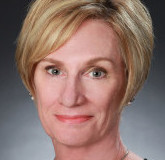 “The Leadership Academy is a great concept,” stated Meadows. “It helps Ottumwa grow its own leaders. This is so important for Ottumwa’s progress – to have leaders who are ready to step to the plate and help our community prosper.”

Meadows was Raised in Williamsburg, Virginia and moved to Ottumwa in 1976, fully intending to return to Virginia after living in the Midwest for a few years, but loved the community and felt so warmly welcomed that she decided to stay here and raise her family with her husband Richard, a District Court Judge.

Meadows graduated from James Madison University in Virginia with a Masters Degree in Education and earned an Administrative Certification from Drake University. She has worked at IHCC, William Penn University, Great Prairie AEA, and the Ottumwa Community School District. Meadows was Principal at Douma School for 3 years and Executive Director of Curriculum and Instruction for 16 years for the OCSD. She developed and implemented the Community Advisory for School Improvement and Educational Equity before retiring from 2010.

Meadows was a previous member of Rotary and served on the Board of Directors for United Way, YMCA, and Junior Achievement. She is currently on the IHCC Advisory, member of the YMCA, First Lutheran Church, and the ORLF Bright Ideas Community Enrichment Committee.

“We are so pleased that Sue has accepted the role of Dean for our 2014-2015 Academy class,” stated Hollie Tometich, Executive Director. “Along with her background in Education and curriculum, she brings her passion for community and leadership development that will benefit next year’s class.”