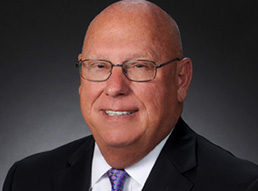 “I’ve been part of the Advisory Board since the inception of Ottumwa Leadership Academy,” stated Rubel. “Leadership development is not some skill you just check off, it’s a lifetime endeavor and I’m pleased that I have the opportunity to be engaged in developing leaders for our community.”

Rubel was born in the small town of Exira in southwestern Iowa. He spent many of his early years on the farm, and like many of his generation he credits this experience with shaping both his strong work ethic and love of rural Iowa.

After high school Tom attended North Iowa Area Community College (NIACC) and then transferred to Yankton College in Yankton, South Dakota. Tom started his career in education in 1970 teaching history and coaching. He went back to school at Northwest Missouri State University and earned his Master’s degree in Education and Specialist’s degree in Education. In his 43 years in education, Tom has served many roles. He has been a teacher, coach, athletic director, high school principal, junior high principal, middle school principal, Associate Superintendent of Curriculum & Instruction, school superintendent, and Executive Dean of Regional Economic Advancement at Indian Hills Community College. He most recently took on the role of Interim Superintendent for Ottumwa Community School District.

Tom’s career is marked by a strong history of leading collaborative projects and community involvement. When asked what has made his career successful thus far, Tom replied, “A leader has to know that they can’t do everything alone. You have to rely on other people. I’ve been lucky in my career to be a part of some excellent teams. My goal was, and continues to be, to foster a collaborative effort among people working toward a common goal.”

“I look forward to having Tom as the Dean for the 2015-2016 Academy,” stated Hollie Tometich, Executive Director. “He has a passion for developing the best in others and this community.”